I am very interested in sharing my art with the community and for giving people in the community the opportunity use my art to be part of a bigger conversation.  Please contact me if you are interested in talking about how I can work with your organization, company, or community to create a sensational custom piece of interactive art for one of your spaces. My pieces are modular and expandable up to any size and budget. Depending on the complexity of design and involvement in the project prices start at around $25-50 per square.  I also have creative ideas for helping you obtain funding for our project. 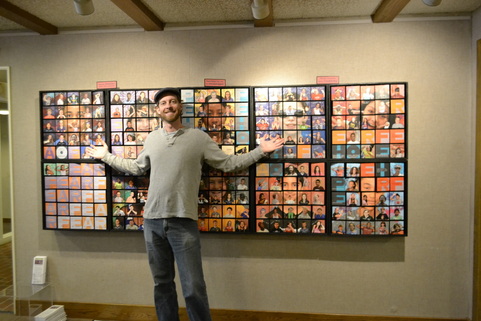 This project was for the 2012 Art Prize competition in Grand Rapids, MI.  It's the largest competition in the world as far as prize money goes. There was over $500,000 in prizes up for grabs, over half of which were chosen by public voting.  The first prize of $200,000 went to the artist who got the most public votes during the 2 1/2 week show.

At three schools and at my summer art shows I interviewed and photographed hundreds of kids aged 5-18 for this project and chose 250 to participate.  They were each asked to answer the questions, "What is your greatest hope/dream?" and "What is your greatest fear?".  Using green screen photography and Photoshop their words and pictures were combined into a huge interactive, movable art piece.  I also added some interesting design elements in the backgrounds of their quotes which allowed the viewer to spell the words HOPE and FEAR as well as assemble quotes from famous authors and historical figures related to HOPE and FEAR.   I still have this art piece and would be interested in selling, donating, or loaning it to a public institution where it can be seen by kids and adults alike. 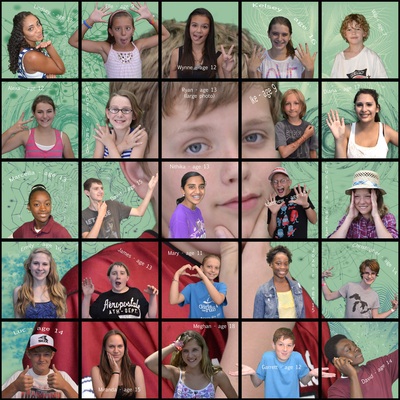 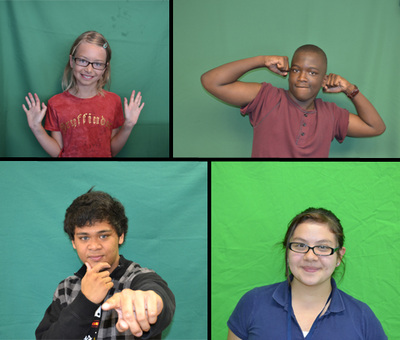 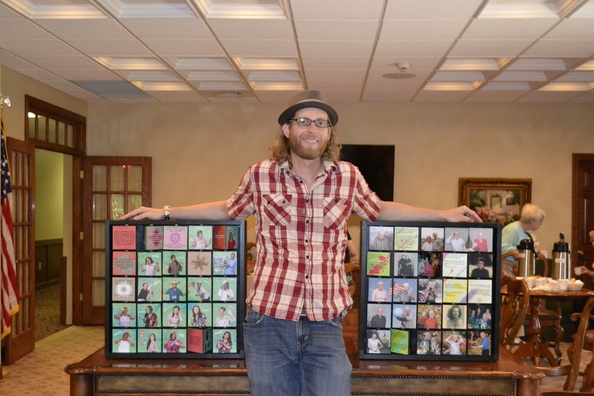 Last year I approached the Alexian Village of Milwaukee to see if any of the senior residents would be interested in being part of an interactive art project.  I had enjoyed working with children on the Hope and Fear project the previous year and it had gotten me thinking that it would be very interesting to interview seniors about their lives and wisdom.  Alexian management found it an interesting proposal and also suggested that I create a piece with their staff.  I donated my time for this project which I completed over the next few months.  I enlisted the help of one of the residents who is a hobbyist photographer to shoot photos of the residents and staff with green screen so I could layer art, photos, and text around the photos.  I was blown away by the photos he took because he really found a way to get each resident and staff person to express their personality in the picture.  Then forms were distributed to the staff and residents asking them to answer a few questions.  Staff were asked to talk about why they enjoy working at Alexian and also what they do to make life more enjoyable for the residents they service.  Residents were asked to contribute a photograph from their youth and also asked a series of questions about themselves.  They had very insightful answers to questions like "What was the most memorable historical event in your life?" and "What would you have done differently in your life if given the chance to do it all over again?".

My artwork has the ability to engage people actively in the creative process. They get to move the pieces into an arrangement that pleases them. More importantly the artworks engage people in a process of learning and discovery, to read the thoughts of others and to learn more about them.  This project specifically provided a way for the staff and residents to learn about each other.  It also gave the residents the opportunity to broaden their relationships with each other by learning about each other's history and opinions.  It also gives new residents a way to connect with the staff and residents already in their new community.  It is much easier to approach a new potential friend when you know about experiences you have in common and have a way to connect. 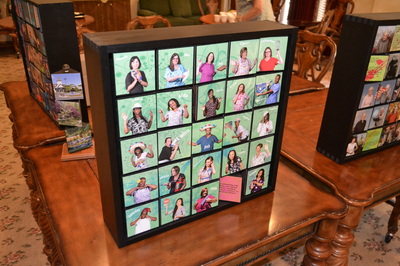 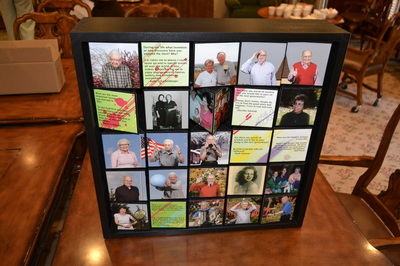 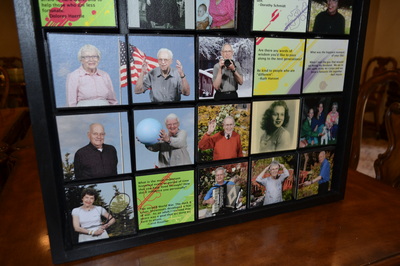 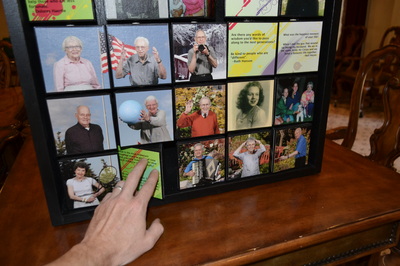 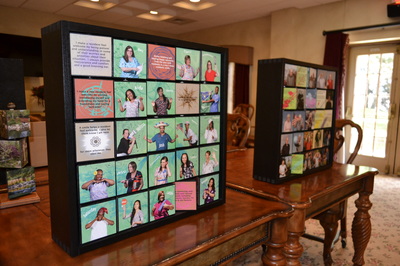 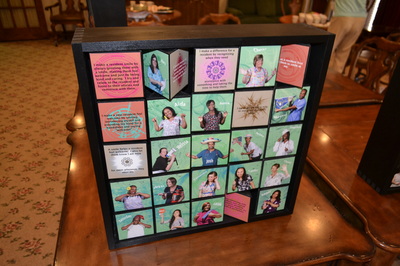 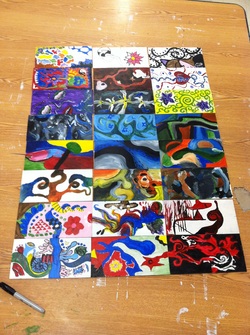 In the winter of  2012-2013 I was asked to be the very first "Artist In Residence" for the Kaneland Schools in Maple Park, a far western suburb of Chicago.  The schools there put on an annual art show of professional artists from the Chicago area where they actually PAY the artists to be part of entertaining the community with their works....what a novel idea, actually compensating artists for their time and for providing entertainment to the public.  I visited each of the six schools Blackberry Elementary, John Stewart Elementary, John Shields Elementary, McDole Elementary,  Harter Middle School, and Kaneland High School. The schools all had a thriving art program and many of the schools had commissioned artworks, sculptures, and murals from local artists.  During my visits I spoke to hundreds of young kids about my career and experiences as an artist and collaborated with their art teachers to design a special project for each school based off of my interactive art works.  It was really fun to see the enthusiasm and curiosity from the kids and to answer their questions.  In classroom settings I was able to work with the students to guide them with their projects.  Each school used a different style for their project. In one school the kids created a flip book where you could mix and match different heads, torsos, and feet - based off of the Exquisite Corpse, a surrealist exercise I learned about in art history.  At another school the students painted on the ceiling tiles in the school and made it so that the tiles would all connect to each other.  At the high school the students worked with each other in groups to make the paintings pictured here on the left. They were painted so that adjoining paintings would connect to each other's designs.  The district also commissioned me to make a photographic totem for each of the schools.  I have to offer thanks to all of the students and teachers who took part and offer special thanks to the organizers Heidi Gilkey and Maria Dripps Paulson for this great opportunity. 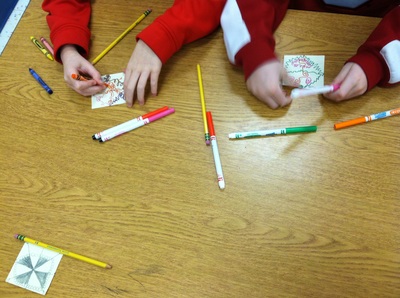 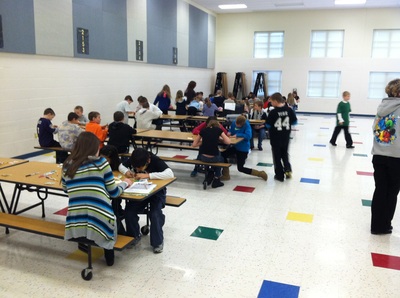 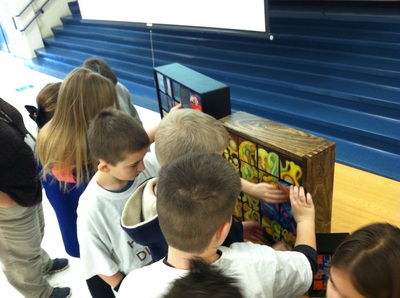 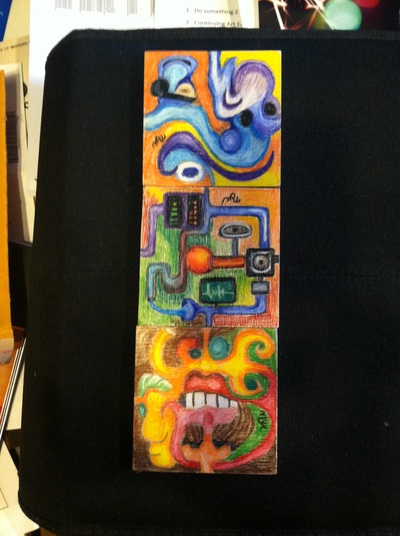 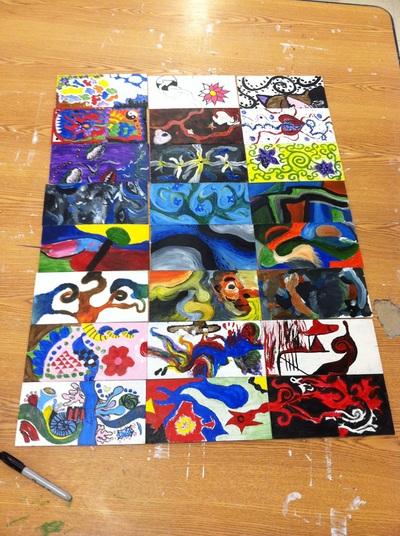